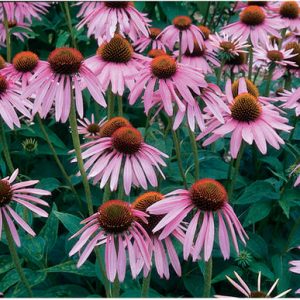 Echinacea has become a popular herbal remedy over the years. It is the name of a group of flowering plants in the daisy family, native to North America where they grow in open wooded areas. The plant’s upper and lower parts are used and made into tablets, tinctures and teas for a variety of ailments such as:

Echinacea has been shown to boost white blood cell count and activity which are one of our first line of defence against disease and infection. It also speeds migration of these white blood cells to areas of infection and stops the production of an enzyme that allows pathogenic organism to become more harmful.

Echinacea has been found to have a mild anti-bacterial affect in the body, and it has been found to inhibit the growth of staphylococcus aureus and diphtheria, two bacteria which pose health threats to humans.

Echinacea has been reported to speed up the healing of damaged tissue by promoting connective tissue regeneration.

Inflammation is a normal immune response created to help protect us from various things but these days people are too inflamed due to stress, toxic burden, poor diet etc. Inflammation when out of control causes an array of health problems, arthritis, IBS, eczema just to name a few. Echinacea has been shown to have anti-inflammatory effects due to what has been reported as a cortisone like effect.

Echinacea can be taken by most people but not those with auto-immune issues. It has also shown to be not as effective taken over a long period of time so is recommended to be taken for a few weeks at a time and then a break.

Newsletter
Top
item(s) in your cart

Please contact us by email before ordering. We'll then price up your order including the carriage and revert back to you! Thanks